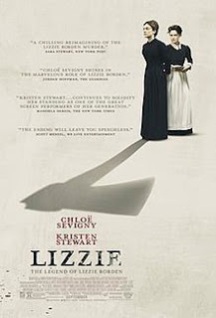 Craig William Macneill’s newest take on the Lizzie Borden murders doesn’t leave much to the imagination, but it’s the well-designed period piece setting, strong Chloe Sevigny performance, and uncalming atmosphere which makes it a quality work of art.
It’s 1892 and Lizzie Borden (Chloe Sevigny) lives a recluse life, under the roof of her strict and frugal father (Jamey Sheridan). As her father’s actions become less tolerable and push Lizzie more and more off the edge, the potential for violence greatens. And when Lizzie finds a friend and then some in new housemaid Bridget (Kristen Stewart), it only becomes closer before she wields the ax as Bridget is abused by her father.
Chloe Sevigny is very believable in her portrayal of the supposed ax murderer, as she emphasizes her characters wit through sharp and intelligent response; her composure when facing Mr. Borden’s wrath is undeniably that of someone who is plotting. As Bridget enters her life, you watch as Lizzie leaves her seclusion for a more open and enlivened spirit. Kristen Stewart, as Bridget, remains emotionally restrained and is silent to Mr. Borden’s exploitations, understanding her situation doesn’t give her much choice. Bridget is the more sympathetic of the two female leads, partially due to the perseverance she shows despite her near helplessness.
The house in which the movie primarily takes place is neat but empty, representing Mr. Borden’s stinginess with money; the lack of light in the household at night helps in crafting the chilling atmosphere of what is to come. The score also adds to the creation of the atmosphere. The script is well-written, witty dialogue authentic of the older time period.
In displaying the murders, the film is revealing, showing every detail of the moment in all of its violent nakedness. The film’s pacing is on the slower side, as tension slowly boils up. My main criticism of the movie is while it gives you plenty of reason to dislike Mr. Borden and justify his murder, the killing of Lizzie’s step-mother is less justified. The resentment Lizzie feels towards her step-mother is not obvious and we never are shown or told why Lizzie feels so negatively. And since Lizzie’s actions are never out of want for money or property, the only justification the movie gives for Lizzie’s killing her step-mother is not enough. The ending was also anti-climactic as once the murders are complete, the film rushes to the end; the aftermath and consequences of these murders are hardly shown at all.
Lizzie works as another adaptation of the Borden murders, and is good for anyone who likes period-dramas; the story feels Shakespearean almost. But the film was never as suspenseful as I felt it could’ve been. 7.5/10

Where to start? I'm a shift supervisor at Starbucks, which is where I spend most of my week. I am also a part-time student seeking an associates degree at Anne Arundel Community College. But my most identifiable trait is my love for movies; I have been reviewing them since 2017. View all posts by Teddy Frederick